A few years ago now, I was on an extended workshop struggling to translate some prep and inspiration into a form to work with. The tutor said ‘sometimes the thing you think is important, isn’t the important thing at all’. At that time I didn’t have enough experience to fully understand what she meant but I do now. However, recognising that you are struggling with an idea, design or self-imposed limitation which has become an important thing isn’t always easy. I think it’s right to wrestle with something to see if it might be successful but then when it isn’t working I have consciously started to say ‘have I made something important which doesn’t need to be and would things be better if I dropped it?’ I think this is especially pertinent when designing or planning because once you get going you are more committed and it’s harder to change.

I have noticed that I seem to have my best moments of clarity when I’m washing my hair and my head is upside down in the bath or when I’m drying it. I know, it’s weird. I would try and adopt a fetching yoga pose to assume an inverted position more regularly to aid my creative thinking but frankly I wouldn’t want to inflict that on the world.

Now you probably don’t need to dump your head in a bath to consider your own work but if you are stuck with something, you might try making space to ask yourself the question above because it will often turn an idea or design upside down or at least give it a good shake about. These are the times when you find out that sometimes your important thing, isn’t.

I have been at home for a few weeks with plenty of time to think and plan which is good because I needed that for my course I’ve started and I have recognised that several ‘important things’ have died along the way to let better ideas and designs emerge. I will post about the course soon as I haven’t really started any of the ‘doing’ so I have little to show, but letting go of important things which weren’t has definitely been a feature in the planning stage which has taken much longer than I expected. In the meanwhile, I’ll chunter on about something connected to my theme around walls.

Robert Frost wrote a famous poem about neighbours rebuilding a stone wall between their fields. You can read it here. It raises the question of when a wall is considered a good thing or not and it’s something I have been reading about. In contrast, very few would argue that the Berlin Wall was a ‘good’ wall although interestingly when it came down, several leaders of countries including Britain said that they didn’t want it down, a unified Germany was something to be feared. The wall was feared. It was feared by those on both sides but particularly the East where the rhetoric and rules were enforced with alarming power. I have read the story of Thierry Noir, the first graffiti artist to paint the wall and several pieces on the web about the wall, its construction, enforcement and collapse. I was taken with the Mauerspechte, or ‘wall woodpeckers’ who came to chip and knock the wall down. For some it was to get a souvenir, for others it was to participate in a moment in history and for others they were driven to come and tear down this awful symbol of injustice and restriction. Even then, folk knew that pieces of wall would sell and today a small chunk of wall fetches between £10 and £300 on Ebay depending on the the graffiti or whether it’s got barbed wire attached etc. Such is the importance of this world-known wall and what it stood for.

So I started thinking about these pieces and how they would include impressions or marks from those who had raged against and for whom the wall was imbibed with immense meaning and identity in terms of self. To live in Berlin was to live with the wall and all the injustice and oppression it stood for. I also found out the size of the 45,000 slabs of reinforced concrete making up the wall; 3.6m high and 1.5m wide. I worked out that I could make 45 rectangles arranged 9×5 (representing the 45,000 slabs) and make these half-size so that the area of them when joined together would represent exactly half the area of a single slab. I then congratulated myself on such a feat of mathematics because I’m useless at this sort of thing and proceeded to look at how to arrange them. I tried this way and that, but various pleasing arrangements all seemed to require an even number and try as I might, 45 just remained extremely odd. I then got frustrated because this representation of size had become an important thing and whilst in one of my upside down moments I realised it wasn’t. I had to ask myself if size really mattered to what I wanted to say and it didn’t, I had high jacked myself. It was the story behind the marks and impressions which I needed to focus on, not trying to tie proportions up neatly. In a state of renewed excitement I decided 24 pieces would do the job just fine.

I find this photo unsettling, the freedom to express on the West side of the wall and the blank, white walls of the East.

I am making 24 small panels. I experimented with making holes in a trial one but found this too literal and decided the small panels could be viewed as the pieces or chunks themselves and didn’t need distressing this way.

The West will be vibrant and colourful. I used Kohinoor to colour the background and Inktense sticks to scribble and write with. It was ironed afterwards but I have to say heat hasn’t fixed the dye completely. I made print blocks where I have isolated small parts of my own rough graffiti and phrases I picked up from research. 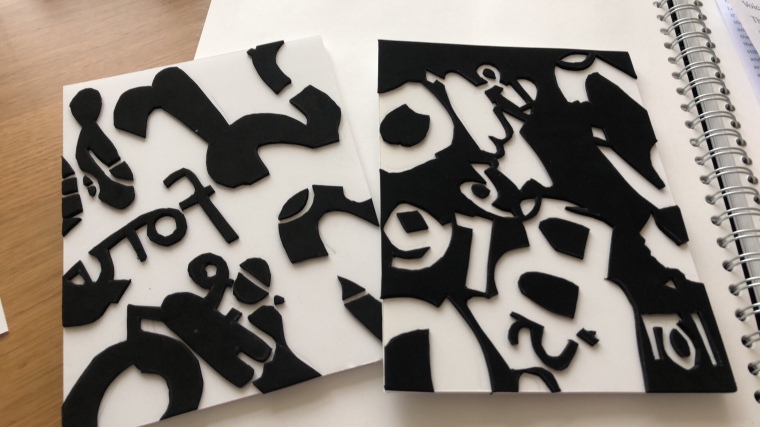 One set of positive and negative print blocks 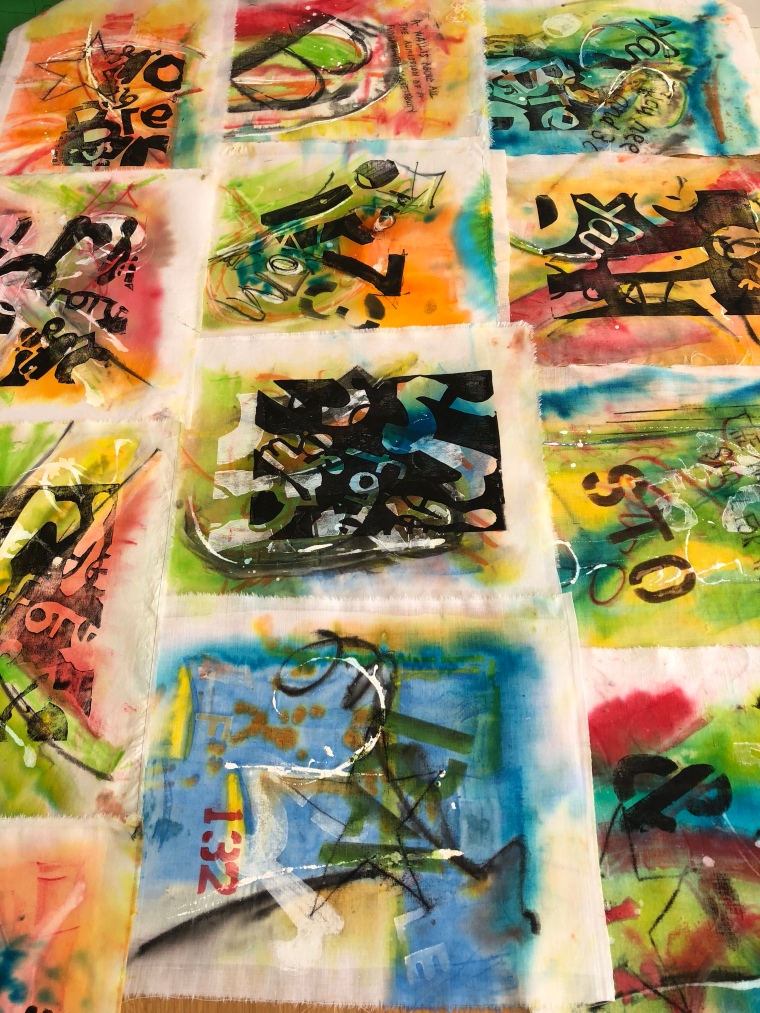 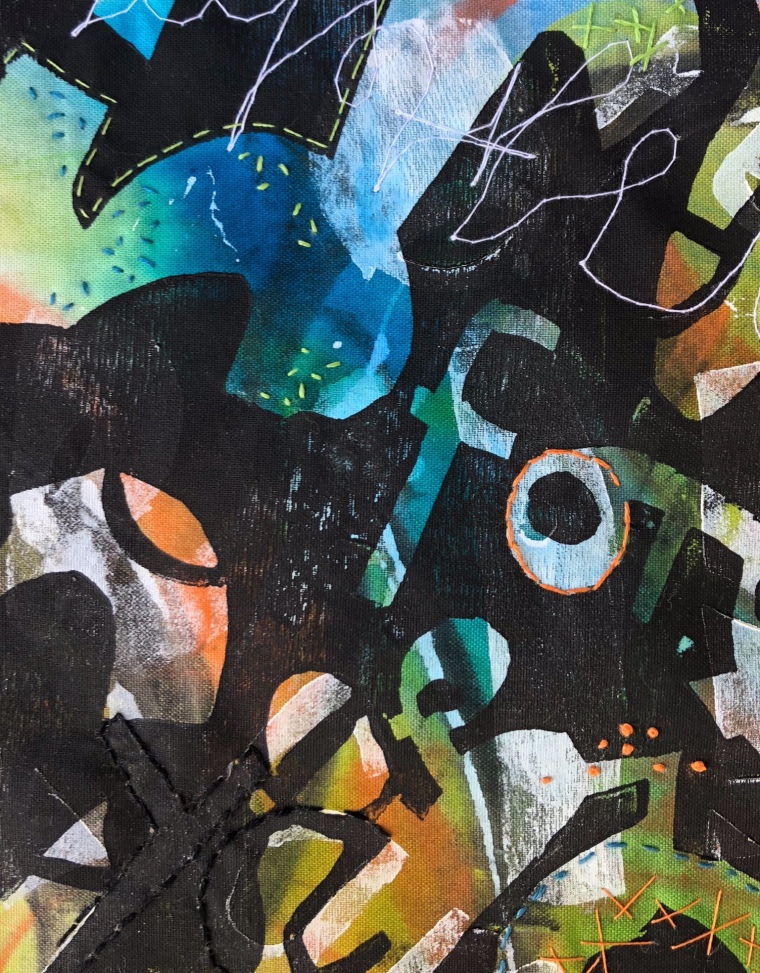 I did consider using the positive and negative prints for West and East but it didn’t work out that way. The West was overprinted in black or has stencilled marks and monoprinted text and marks. I wanted the letters, marks and words to be impressions of protest rather than readable phrases.

The East will be white. Some panels have the graffiti on them to represent the fact that people on the East felt just as strongly as the West but were not allowed a voice (colour). There are shoe and hand-marks representing the escapes attempted and several bullet holes. None of these were visible in reality, but history testifies to their presence impregnating the wall nonetheless and this set feel more intense to me.

These small panels will be arranged in pairs pointing out so that when you view them from the left (West) you see colour. Viewed from the right (East) you will only see white, but be able to make out various marks and impressions from textures and threads. I couldn’t have designed this had I held fast to my thoughts around size and proportion, odd number 45 had to go. It would have completely prevented what I hope will be a successful design.

Well there we have it. One example of an important thing that wasn’t.

I am off to Ireland to with my friend Mary to see Kim and Poppy for a few days. I’m so looking forward to some fun and malarkey with interludes of stitching.

I leave you with a poem about the pieces of wall…

One chunk for only twenty dollars

Look at this one

this one is stained with deserters’ blood

and see these two dark holes

they were burned by an anxious gaze

the remains of cold war on this one

and what we have here

are the dancing footprints of the youth

and the shouting and clapping

when a heavy chain tore it down

Our supply is abundant

after the Berlin Wall

we’ll tear down the walls

the rich and the poor

the fortunate and the unfortunate

and of course we always have 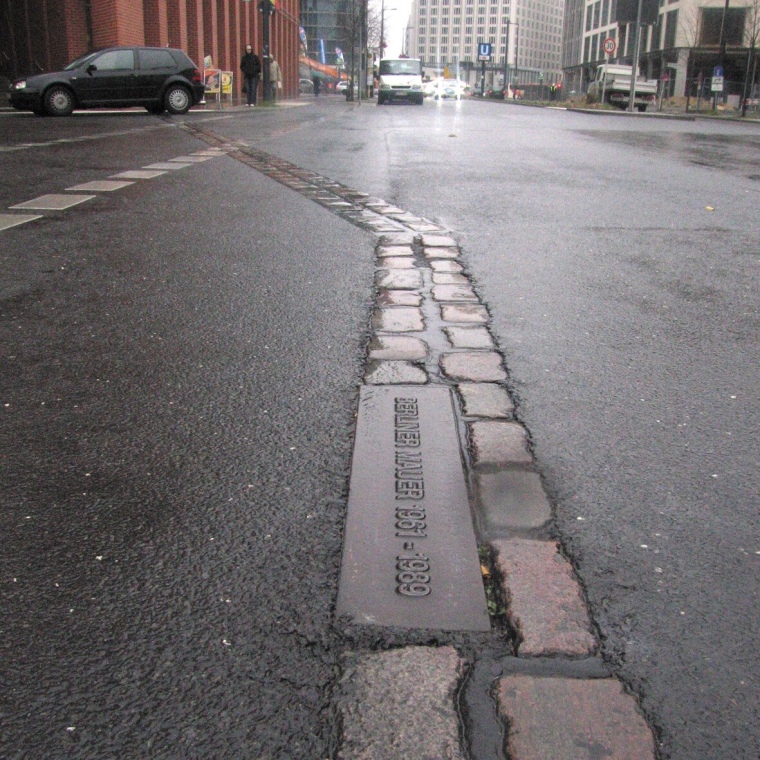 The cobbles marking the position of the Berlin Wall, present day